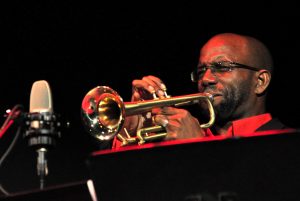 Following on from a successful opening night in September, Jazz @ The Carib returns for Concert 2 on October 21st featuring the prolific Rellon Brown and his Calypso Jazz band Dominant Seventh Orchestra in a Calypso History Month tribute.

Calypso Anthem, as the show is titled, will be an ode to the rich and colourful social commentary calypso to be found in the last half of the 20th century.  Translating that for the live stage, and joining Brown and band, will be The Holistic X Band, as well as young musicians/artistes of the Holistic X Band who will lend their voices to some of the famous calypsos planned for the evening, such as: Denyse Plummer’s ‘Nah Leaving’; ‘The Journey’ by Christopher ‘Tambu’ Herbert; ‘Progress’ by King Austin; and Stalin’s ‘We Could Make It If We Try’, alongside many more.

Musically arranged by Brown and The Dominant Seventh, the concert’s repertoire was chosen to represent a broad spectrum of artistes, but dovetail into one common theme: Nation Building.

Rellon Brown himself is no stranger to the Little Carib stage. A highly versatile trumpeter, musical director, lecturer, arranger and composer hailing from our very own shores, he has under his belt a Cacique Award for Most Outstanding Musical Direction for Eric Barrys’: The Catalyst, itself performed at LCT back in 2005.

He also produced stellar musical arrangements there for Monkey Mountain Foundations’ 2015 production of Derek Walcotts’ Ti Jean And His Brothers; and with Dominant Seventh, Brown produced the bands’ first CD titled HomeGrown, which launched at LCT as well in 2016, and remains a high water mark for indigenous music and an outstanding example of Calypso Jazz.

October may be about Calypso, but November is a special month at The Little Carib as well. Not only is the iconic arts venue turning 70 (having formally opened its doors on November 25 in 1948); it is also the birth month of its founder, the late, great Beryl McBurnie. This current run of performances hopes to preserve and continue her long, celebrated legacy as both performer and patron of the arts in Trinidad and Tobago and the Caribbean.

We're not around right now. But you can send us an email and we'll get back to you, asap.